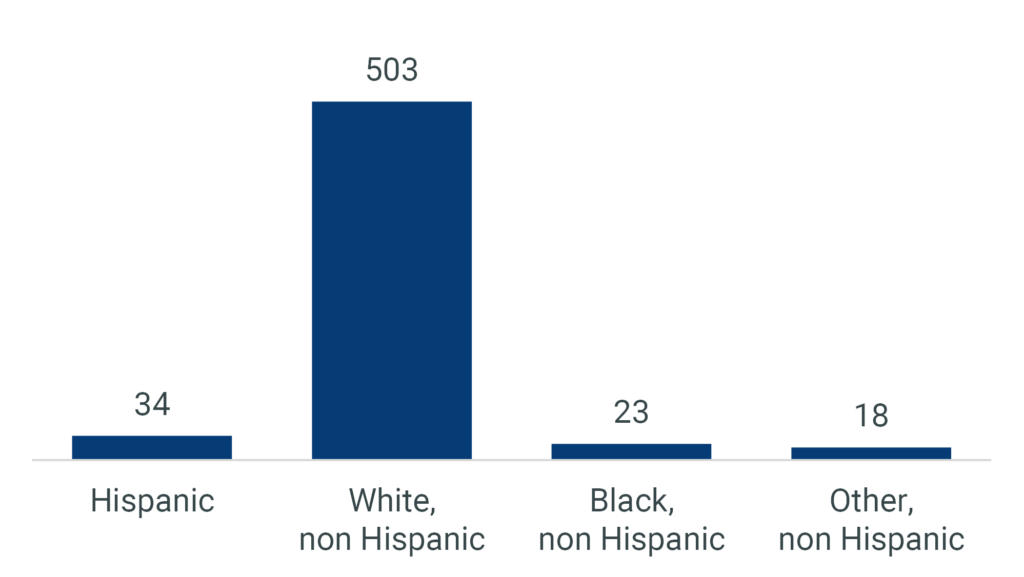 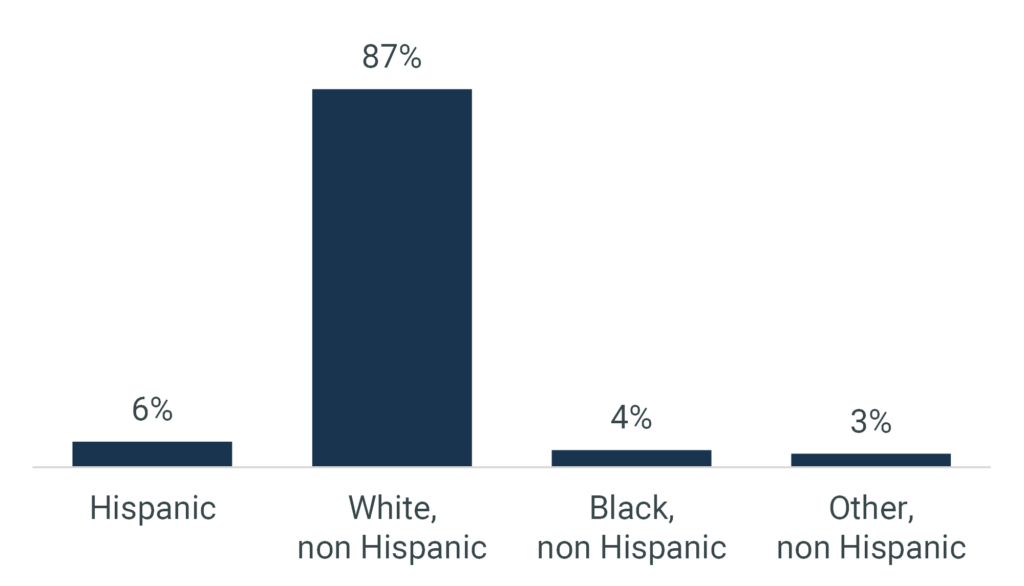 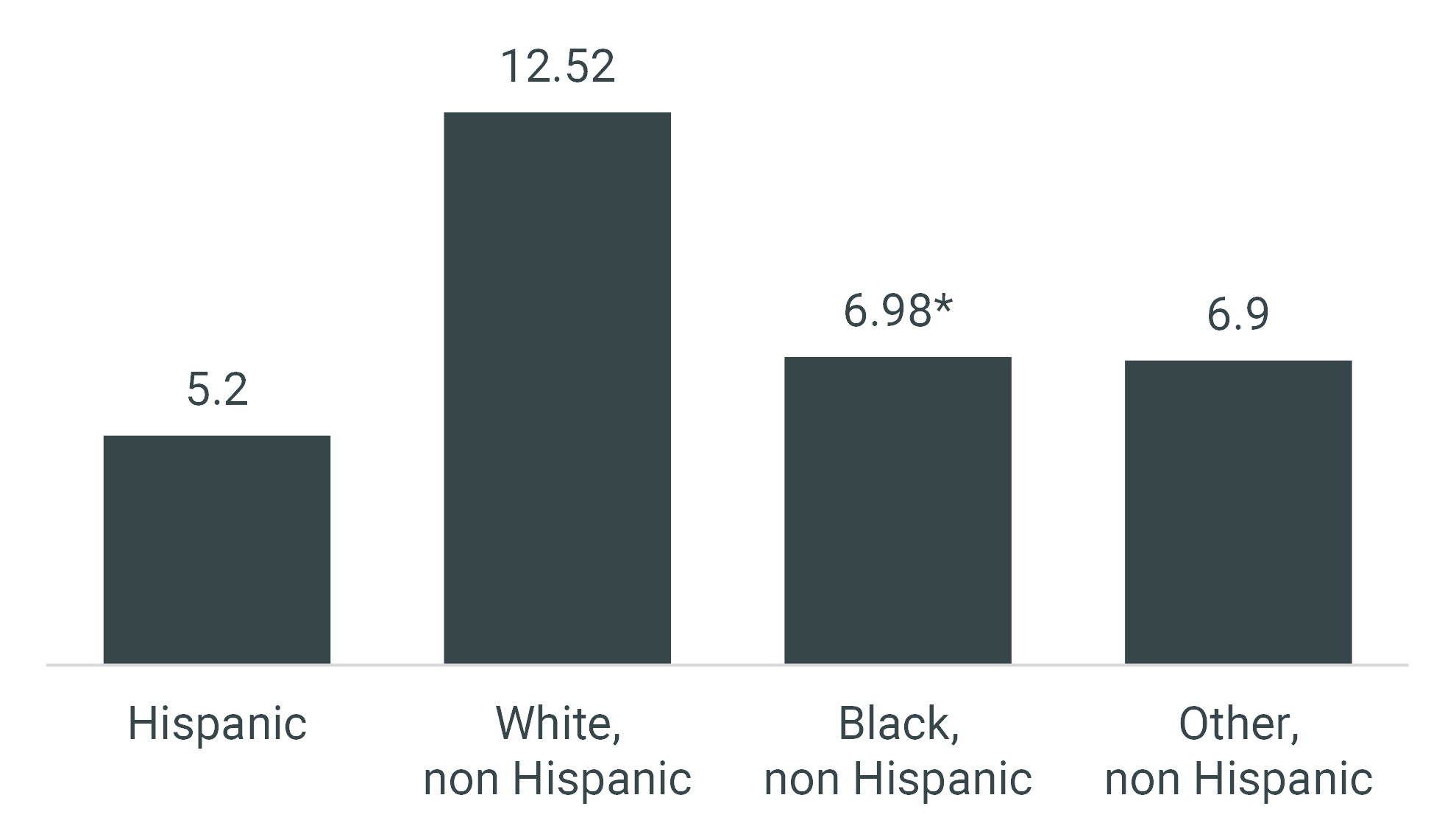 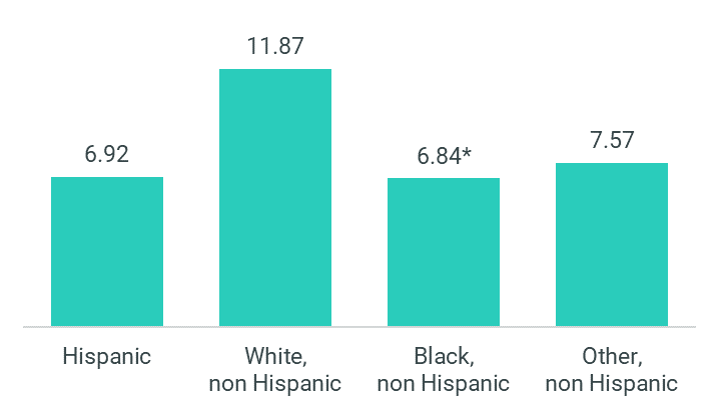 Notes: Data include suicide deaths that occurred in Rhode Island among Rhode Island residents. In compliance with RIDOH’s Small Number Reporting Policy, counts of less than five are not shown. Any use of counts to calculate rates and proportions is subject to RIDOH’s Small Number Reporting Policy available at: health.ri.gov/publications/policies/smallnumbersreporting.pdf

Suicide impacts everyone, regardless of your race or ethnicity. But research tells us that some groups are more likely to attempt suicide.

“Rate per 100,000” gives a rate within that group of people. For example, imagine you gathered together 100,000 white, non-Hispanic people, — a rate of 12.52 means about 13 of them would have died by suicide. By looking at rates within a population, we can get a better sense of how that population is impacted by suicide, even if it is a small group numerically within the State. Looking at rates, we can see that the rates for people of color in Rhode Island are closer to the rates for white, non-Hispanic people than you would think if you only looked at count, or percentage.

The final, important piece of data to understand is “age-adjusted rate”. Age plays a big role in your risk for suicide. Different groups of people have different age distributions – meaning one group may have more old people, or one group may have more young people. Age adjusting takes the crude rates for each group, and shows what the rates would have been if all groups had the same age distribution. It makes it so we can compare between groups that have different age distributions. For example, in Rhode Island, white non-Hispanic people make up a greater number of the older population than do Hispanic people. Age-adjusting suicide rates allows us to compare these different populations. Looking at the age-adjusted rates tells us that the highest rate is still amongst white, non-Hispanic people; however, it is lower than represented in the other data; whereas the rate amongst Hispanic people has become the second highest. All the rates have moved closer together; with the rate for white, non-Hispanic people lowering and the rates for people of color increasing or staying about the same in each group.

A note about “Other, non-Hispanic”. Rhode Island is not able to evaluate suicide rates for the many different ethnic groups contained within this category due to due to the Department of Health’s small numbers policy. Among other groups, this category contains Asian and Pacific Islander people, and American Indian/Alaskan Native people. In particular, it is important to recognize that national evidence tells us that American Indian/Alaskan Native people are more likely than any other racial or ethnic group to die by suicide.

Tips for understanding the data on this page

It’s helpful to understand what some of the data terms mean. Here is information about percentages and rates.

Percentages tell us how many people have died by suicide compared to the whole group of people. For instance: when we look at the percentages of people who have died by age, the graph shows us out of all the suicide deaths in the state, how many deaths were among people under 24 and over 65.